35 USC §289 sets for a special damage remedy for design patents:

Whoever during the term of a patent for a design, without license of the owner, (1) applies the patented design, or any colorable imitation thereof, to any article of manufacture for the purpose of sale, or (2) sells or exposes for sale any article of manufacture to which such design or colorable imitation has been applied shall be liable to the owner to the extent of his total profit, but not less than $250, recoverable in any United States district court having jurisdiction of the parties.

On remand, it is entirely possible that $399 million damage award could be affirmed, if it is determined that the article of manufacture covered is the Samsung smart phone and not simply some part of the smart phone.  U.S. Patent Nos. D618677 and D593087 disclose and claim an “electronic device.” which presumably covers at least some of the “innards” of the phone: 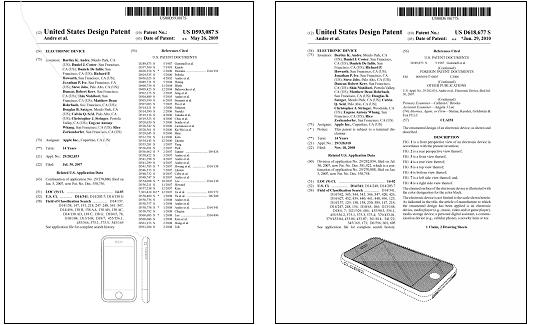 U.S. Patent No. D604305 discloses and claims a “graphical user interface for a display screen or portion thereof” — which likewise would include at least some of the “innards” of the phone for generating the images on the display: How these patents are treated on remand will be instructive on how design patents should be drafted going forward.  There may be an advantage in drafting the application so that the “article of manufacture” is a comprehensive (and profitable) as possible.

Failure of Licensee to Mark May Upend $15.7 Million Damage Award