On May 15, 2018, Hasbro obtained another trademark registration. This fact alone is not surprising. After all, Hasbro owns over 5,500 registered trademarks. What makes U.S. Reg. No. 5,467,089 unique is what it covers: the particular smell of Play-doh brand modeling compound.

One may ask, does smell matter? According to Hasbro, yes it does. Hasbro’s Vice President, Global Brand Strategy and Marketing, declared “Without the additive, the scent of Applicant’s Play-Doh modeling compound is bland and flat.” But, it’s not just any smell, it’s the unique “sweet, slightly musky, vanilla fragrance, with slight overtones of cherry, combined with the smell of a salted, wheat-based dough.”

Attuned readers will note that the ‘089 registration is based on a 2(f) claim of acquired distinctiveness, dating from September 12, 1955. Hasbro supports its claim with several declarations and over 340 articles, advertisements, testimonials and pictures. Notably, Hasbro highlighted its “Stop and Smell the Play-Doh campaign” as well as articles professing “the wonderful Play-Doh smell” which is “impregnated in your mind” and that the “scent of Play-Doh modeling compound is ‘as identifiable to many consumers as their mothers’ faces.”

A couple of other facts from the prosecution file: 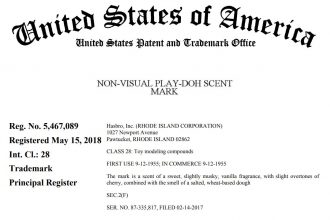