HBO is going to war and firing every arrow in its IP arsenal. Or so it seems. Last month, HBO set its sights on the Rancho Santa Ana Botanic Garden’s GAME OF THORNS trademark (see Bryan Wheelock’s post on the topic). This month, HBO is aiming for the President of the United States.

On November 2, 2018, the President tweeted the following image: 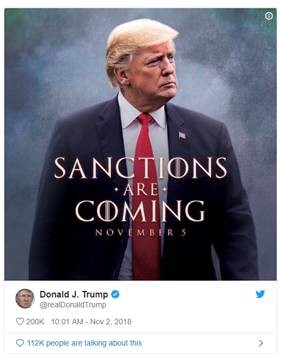 Apparently, HBO is contending that the President’s use of the words “Sanctions are coming” violates HBO’s trademark rights in the phrase “Winter is coming.” HBO sent statements to several news outlets stating “we would prefer that our trademark not be misappropriated for political purposes.”

HBO is going to need a bigger caliber ammunition. At the outset, it is worth noting the doctrine of trademark misuse is a defense available to accused infringers. In application, the defense would preclude enforcement of trademark rights based on the rights holder’s conduct. Trademark misuse is not an offensive weapon to be used by the rights holder.

Assuming HBO meant to tweet “How do you say trademark infringement” or “How do you say false association,” those shots would also miss the mark. HBO does own several trademark registrations and applications for the phrase “WINTER IS COMING” for mugs, drinking glasses, t-shirts and online and retail store services.” (e.g., Registrations Nos. 4,764,716; 4,874,426; and 4,996,157). Those applications do not provide HBO with the firepower to scorch anyone who uses an offending phrase.

The President’s tweet is shielded from infringement liability in a variety of manners. First, a claim for trademark infringement under (15 USC 1114) or false association (15 USC 1125) requires that the offending party used “in commerce” the offending term in connection with “good and services.” To prevail, HBO would have to allege that the “sanctions” are a good or service and that the President’s tweet satisfied the “use in commerce” requirement. Notably, HBO’s “winter is coming” registrations do not cover “international sanctions” which is not surprising for several reasons, one of which is that the USPTO Identification Manual does not list international sanctions as a recognized good or service.

Second, that use must be likely to cause confusion, mistake or to deceive consumers as to the source, affiliation, connection or association between the offending party and the rights holder. Here, HBO would need to prove consumers would view “Sanctions are Coming” as similar to “Winter is Coming,” that despite the obvious differences in the mark, goods, channels of trade etc.. HBO would also need to prove that consumers would believe that HBO approves or sponsors the “sanctions” mentioned in the President’s tweet.

Third, the President’s tweet is more appropriately viewed as protected fair use and/or non-commercial use under 15 USC 1125(c)(3). Notably, “fair use” includes “parodying.” While Circuit law may differ on what constitutes a parody, in general, the parodying use must convey a connection to the original while also indicating that it a parody of the original. Here, the President seemed to intentionally invoke the “Winter is Coming” mark (e.g., use of similar font, smoke imagery and dark background). The nature of the parody seems evident on its face, however, when juxtaposing the real-world threat of sanctions with the fantastical threat of Winter in the Game of Thrones universe.

So, just as the original “Winter is Coming” warning inspires vigilance, it’s best to act like Ned Stark and keep a level approach (we won’t say level headed) in times of trademark strife and chose your battles wisely. Here, HBO probably should have heeded the advice of another winter inspired heroine and simply “let it go.”

Policing the Trademark Playground and Calling Out Bullies