Last month, the United States Patent and Trademark Office released its 2018 Performance and Accountability Report, which furnishes a public update on the USPTO’s programmatic and financial performance for the 2018 Fiscal Year.

Following an opening note from Director Iancu highlighting the issuance of the 10 millionth patent and the USPTO’s focus on providing further guidance on subject matter eligibility and improving the availability, strength, and consistency of automatic tools and electronic processing, the Report is broken into five principal sections, which are discussed in turn.

In this first section, the Report summarizes the USPTO’s constitutional and statutory responsibilities and its organizational and user-fee dependent structure, including an overview of the regional offices and workforce and a further discussion of the issuance of the 10 millionth patent and relating patent cover design.

Oil States Energy Services v. Greene’s Energy Group — Agreeing with the USPTO’s position, the Court held that “inter partes review before the USPTO’s PTAB [does not] violate[] the Seventh Amendment of the U.S. Constitution by extinguishing a private property right through a non-Article II forum without a jury.”

SAS Institute, Inc. v. Iancu — Disagreeing with the USPTO’s position, the Court held “that the PTAB must issue a final written decision addressing every patent claim challenged in an inter partes review petition.”

U.S. Court of Appeals for the Federal Circuit:

NantKwest v. Matal — Sitting en banc, the Federal Circuit held “that the USPTO would be entitled to full compensation for resources spent in the defense of Section 145 appeals.”

Most notably, the Management’s Discussion and Analysis Section outlines the USPTO’s performance‑planning results and compliance with the 2014–2018 Strategic Plan (est. 2014), as determined by 10 key performance metrics, and details the expected challenges in the years to come. As an overview, Table 3 copied below highlights actual performance results for the past four fiscal years. 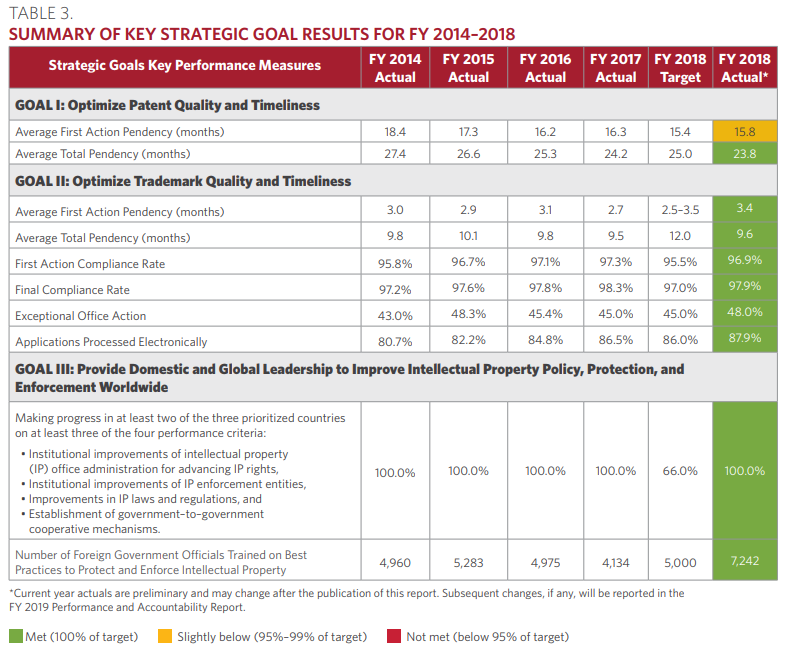 Potential challenges include maintaining proper funding despite continued governmental instability that may jeopardize the USPTO’s ability to access its fees, while also minimizing costs and optimizing investment returns — in particular, with regard to investments in IT. Other challenges revolve around continued legal challenges arising from the USPTO’s interpretation of various sections of the Leahy-Smith America Invents Act (“AIA”).

The remainder of the Management’s Discussion and Analysis Section summarizes the USPTO’s 2018 financial statements, including a composition of its assets and liabilities; surveys of deferred revenue, net position, earned revenue, program costs, patent and trademark costs, and enforcement costs; and a review of funding sources.

In this second section, a Balanced Scorecard method is used to provide a detailed discussion of the USPTO’s compliance with the 2014–2018 Strategic Plan, as highlighted above. Takeaways from the USPTO’s analysis are provided below.

Making further strides toward improving its effectiveness and efficiency, the USPTO will continue to invest in Examiner training and career monitoring and will expand its patent application initiatives (such as, the Track One for prioritized examination, First Action Interview, Quick Path Information Disclosure Statement (“QPIDS”), the After Final Consideration Program 2.0 (“AFCP 2.0”), etc.), as well as the Post Grant Outcomes program, which seeks to provide examiners with the useful information from a variety of sources. The USPTO will also continue to bolster its Pro Se Art Unit and take steps to increase international cooperation and work sharing. For example, the USPTO continues to expand its Patent Prosecution Highway (“PPH”) programs. Further still, the USPTO also will continue to invest in information technology services that are designed to streamline the filing and review processes and will continue to expand its public outreach.

To maintain continued compliance with these optimum conditions, the USPTO will continue to invest in efficient electronic processing of trademark applications and examiner training and support.

The USPTO offers a plethora of educational events and programs, including congressional briefing and public meetings and events globally, regionally, in‑person, and online. The USPTO also offers a variety of on-demand online training and educational modules. For example, the following table summarizes the number of persons trained nationally and internationally on best practices to protect and enforce intellectual property. 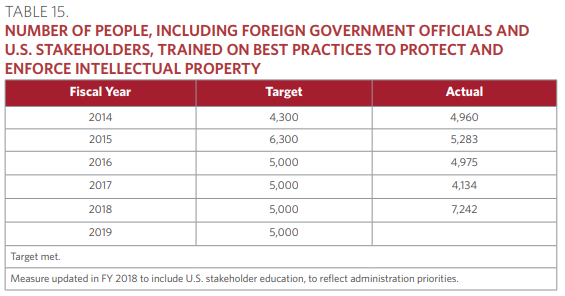 Several Management Goals are directed to the evolution and improvement of the USPTO’s IT infrastructure and services by delivering cost-effective and seamless next-generation IT solutions. In pursuit of this goal, the USPTO has developed and implemented various prosecution tools for patent examiners, patent applicants, and international partners. For example, following the initial pilot in December 2016, as of the end of 2018, more than half of the Patent Corps were using the Office Correspondence (“OC”) to create office actions. The legacy system (OACS) is expected to be retired this year. The USPTO also continues to update the Trademark Next Generation (“TMNG”) tool to combat the significant challenges experienced in 2018.

Other Management Goals are directed to building and maintaining a diverse and engaged workforce. In pursuit of this goal, the USPTO continues to improve teleworking availability and management systems relating thereto; and continues to provide pathways for additional education and internal advancement.

This third section, begins with an introductory letter by Sean M. Mildrew, acting Chief Financial Officer for the USPTO. Mr. Mildrew highlights the overall financial stability of the USPTO and the continued efforts to replace the legacy refund approval/dismissal system with the Fee Processing Next Generation System. The legacy fee collection system is expected to be retired in its entirety this year.

KPMG LLP, an independent public accounting firm, performed an audit in accordance with generally accepted auditing standards and determined that the above financial statements were fairly presented and identified no instances of reportable noncompliance. However, KPMG did identify a significant deficiency in the internal control over financial reporting relating to information technology general controls in the areas of access administration control and configuration management change controls. A copy of KPMG’s entire report is attached to the fourth section. This report, however, excludes specific information regarding the above noted control deficiencies, as such information was provided to USPTO management in a separate limited use report.

In SUM, the Performance and Accountability Report for the 2018 Fiscal Year contains a wealth of current and historical data that can be used to benchmark the USPTO overall performance and progress towards specifically enumerated goals.

Looking Forward: The USPTO is currently finalizing a new five-year strategic plan and expects to release the final 2018–2022 Strategic Plan in November 2018.