Inter partes review turned three years old on Sept. 16, 2015, and, despite some changes on the horizon, it seems clear that the momentum behind these proceedings will only increase over the coming years. From anti-troll defendants, to companies seeking to punch holes in a competitors’ patent portfolio, to even a hedge fund manager using IPRs to make millions in the stock market, the uses of IPR are expanding and its popularity exploding.

Statistics Tell the Story … Or Do They?

Although much can be learned by performing a statistical analysis of IPR proceedings to learn about trends and strategies, it is important to view statistics with a discerning eye.

First, though, it is apparent that the volume of IPR proceedings has far exceeded all estimations. The chart below demonstrates the quick ramp-up of IPR petition filings, from modest beginnings to over 30 petitions being per week as of the IPR three-year anniversary. This pace makes the Patent Trial and Appeal Board the second busiest patent jurisdiction in the United States, behind only the Eastern District of Texas. 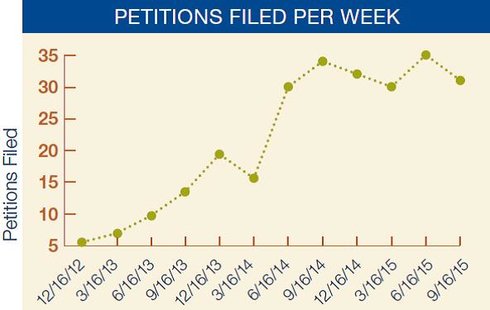 To a large extent, the popularity of the proceedings has followed the success of IPR petitioners. While numbers have moderated to some extent in recent quarters, petitioners have had by far the better of the action in IPR proceedings. In large part, petitioners can credit this success to: (1) a lower burden of proof than federal court litigation (preponderance of the evidence versus clear and convincing evidence), (2) a broader claim construction standard than federal court litigation (broadest reasonable interpretation versus Phillips standard), and (3) many decisions that hamper the ability of patent owners to extend their rights (i.e., only six motions to amend granted to date). Overall, as of the IPR three-year anniversary, if your patent claims are targeted in an IPR petition, the odds of each claim surviving is now almost a flip of the coin: 51 percent. The charts below detail that success rate at both the IPR institution decision date and the final written decision date:

Additional trends can be ascertained by parsing IPRs into broad subject matter categories. Electrical and computer patents are targeted more frequently than all other technologies combined. This is not surprising given that IPR was created to, at least some degree, combat the perceived nonpracticing entity problem in federal court litigation. Because most of those cases are in the electrical and computer arts, it is not surprising that IPR petitions directed to those technologies are the most prevalent. And, while such patents are increasingly being invalidated in the federal courts under § 101 and § 112 challenges, the data is no better before the PTAB. Patent claims in the electrical and computer art are the most likely to be deemed unpatentable before the PTAB in an IPR trial.